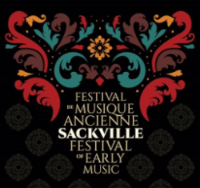 This week, the Sackville Festival of Early Music announced its fourteenth annual series of concerts and conversations, to take place from September 17th to 23rd in and around Sackville, New Brunswick.

The announcement invites a question: what is “early music” anyway?

The term as used broadly today describes music of the Renaissance, Baroque, and early Classical styles, spanning a time period roughly from 1500 to 1800.  The term also refers to a style of performance that seeks to re-create the sound intended by the original composers, using instruments that date from their time.

This year’s program offers a rich and varied sampler of  early music experiences.

The opening concert, on Friday, September 21st, will illustrate vividly how authenticity and imagination can combine to achieve an exciting re-creation of what music sounded like in earlier times.  The ensemble l’Harmonie des Saisons (Harmony of the Seasons), based in Granby, Québec, will invite the audience to enjoy a musical soirée as it might have taken place in the home of composer Johann Sebastian Bach, in Leipzig, Germany in the mid-1700s.

The following evening, The Rose Ensemble, a talented group based in St. Paul, Minnesota will present Land of Three Faiths: Voices of Ancient Mediterranean Jews, Christians, and Muslims. The program explores the musical interface between three cultures that have shaped the history of Europe for centuries.

The third and final concert, scheduled for 2:30 p.m. on Sunday, Septembter 23rd, will feature guitarist Pascal Valois and violinist Jacques-André Houle playing a series of pieces that may well have been premiered in the Concert Spirituel,  a popular concert venue that flourished in Paris between 1770 and 1790.

Of course, music lovers who look forward to the Sackville Festival of Early Music every September know that the concert series is only one part of the event. The festival organizers are dedicated to introducing  school children to their musical heritage and offering opportunities for those who cannot attend conventional concerts to hear excellent performances. Each year, the Festival Outreach Program brings in speakers and muscians to present public talks, conduct hands-on workshops at area schools, and give special performances at the Drew Nursing Home.

This year will be no exception.  The Festival will open with a public presentation by Mount Allison Fine Arts graduate Deanna Musgrave outlining her experience with what she calls “visual music.” The talk will end with performances of Anthony Genges’s piece ”Motion” and Jordan Nobles’s  “Circle of Fifths” performed by Andrew Reed Miller (contrabass), Karin Aurell (flutes), James Kalyn (clarinet), Joël Cormier (percussion).

Next, there will be a master class offered to Mount Allison music students by members of l’Harmonie des Saisons.

And finally, school concerts, offered free of charge, will explore the theme “Sweden’s Secret” featuring Kirsty Money (nyckelharpa) and Jude Pelley (guitar), exploring the dance forms of Swedish traditional music, as well as other repertoire which the nyckelharpa enhances, including baroque repertoire and contemporary songs.

2018 has been a busy year for ArtsLink NB. Out Catapult program is in fine fettle, our Arts Education project is moving into its second phase, and we’ve cooked up a bevy of exciting workshops, including a writing intensive, for the coming months. With all of that activity, you might wonder when our staff get a rest. Well, in this instance, the answer is the old adage, “A change is as good as a rest.”

Our very energetic Executive Director Gillian Dykeman will be leaving ArtsLink to reclaim time for her art practice and to put her love of teaching into practice at the NB College of Craft and Design. She will continue to champion the Arts Education project as she transitions into these pursuits over the fall. Gillian will be greatly missed when she steps away from her role as ED at the end of November, but we’re always happy to see artists return to their roots.

Julie Whitenect will be stepping into the role of Executive Director come Dec. 2018. We are thrilled to have her experience and knowledge come to the helm. Her transition from Associate Director to Executive Director will ensure continuity for ongoing projects and service to our membership.

Kenzie Hancox joined the ArtsLink team as a project coordinator in August. Sarah Jones continues in her role as coordinator of the Catapult program. Watch for a job posting for a new staff member in the coming weeks.

Can you imagine Fredericton without a live performance venue like the Playhouse? Neither can we. We must make our plan for a new venue a reality before it’s too late. Our community needs it. Our artists need it. Our downtown needs it.

We have put together all of the information we have on the state of the current Playhouse building as well as our plans for our future in a clear and current website called Build the Playhouse 2.0: https://buildtheplayhouse2.ca

Please have a look, follow along, and please SPEAK UP! If you think this project is important, your community needs to hear from you now. You ca subscribe to project updates through this link too!

Having trouble filling out the new Artist Development Plan for Factor Canada? Here are some tips that might help!

From September 7 to 23, Gallery 78 is proud to present Kathryn Cronin’s work in her first solo exhibition, Fortified. Delving into a theme she explored during the Advanced Studio Practice program at the NBCCD, she shows in her jewellery how life changes and continues to form her, and one must overcome difficulties. In her words: “This series is made of small, weak segments of wire that I fused together over and over until I had a sizeable piece that is architectural and grand, and infinitely stronger both physically and aesthetically.”

A New Brunswick filmmaker plans to break into the booming webinar market with his new venture.

“Greg Hemmings, founder of Saint John-based Hemmings House Pictures, is currently beta testing Filmpreneur, a webinar course and community geared towards not just filmmakers, but creative entrepreneurs in all fields.”

Until 31 August: Summer Fun Days are EVERY DAY in August! Regular admission. These family adventures are for the young and young at heart. Join the NBM for a full day of themed activities. Follow us on Facebook to ensure you can plan your day to capture all of the excitement.

Fundy FRINGE Festival at the NBM

Until 25 August, 2018: Fundy FRINGE Festival at the New Brunswick Museum. The NBM is happy to be a part of this performing arts festival bringing unconventional theatre from the fringes to the mainstream and will be host to three shows – Bicycling by Mistake; The Wicked Fountain of Youth; and The Baes of Fundy. All shows will cost $10 at the door or audience members may purchase a Festival pass which will offer 8 shows for $60. For more information and to see a complete listing of events visit www.fundyfringefestival.com

To register, go to