Music•Musique NB is working on an export strategy to help guide the growth and market expansion of New Brunswick’s professional music industry, from 2016-18. Part of the research for the Export Strategy includes gathering information from you – the musicians and industry folks that are the heart and soul of New Brunswick’s music scene. We need to hear from you so that we can offer up programs and services that answer to your needs, and help you move forward towards increased revenus and market presence in the coming years.

So, in the coming few days, please take 10 minutes to respond to the survey below. The survey results as well as other research findings will be made known during Festival (506), in October, so make sure you count yourself in!

Local-FM is pleased to announce that Micheal Mohan has been chosen join the station as our new Artist-In-Residence for the month of August!

Micheal’s new project is called “Loveline” and it exists in an interesting space where film overlaps with radio culture. Michael will be creating film & audio for a three-episode series that will air on Local-FM along with an accompanying film screening at the end of his three-week residency. We are very excited to have him join our team for the month of August and to see his finished work!
If you would like to contact Michael for an interview or more detail about his project, please email him at :
michael_mohan@live.ca or by phone at : (506) 343-4033

Read this great article featured in Created Here as a prelude to a fantastic fine art event.

In partnership with the the Fredericton Playhouse, the producers of last summer’s Joseph and the Amazing Technicolor® Dreamcoat are excited to present their third summer musical production: EVITA.

With more than 20 major awards to its credit, and an Oscar winning film version starring Madonna and Antonio Banderas, Tim Rice and Andrew Lloyd Webber’s EVITA is iconic. Featuring some of the best loved songs in musical theatre, including “Don’t Cry For Me Argentina”, “On This Night of a Thousand Stars”, “You Must Love Me”, and “Another Suitcase in Another Hall”, EVITA charts the story of Eva Peron, wife of former Argentine dictator Juan Peron, from her humble beginnings through to the extraordinary wealth, power and status which ultimately led her to be heralded as the “spiritual leader of the nation.”

Five galleries have joined together and will be open to the public from 5 until 7 pm on Thursday August 25 for a Culture Crawl. Bring your friends, family and out-of-town visitors and experience the pleasure of visual art while strolling through beautiful downtown Fredericton. Be sure to visit the George Fry Gallery at the NB College of Craft and Design featuring an interdisciplinary exhibit of works by students from the Graduate Studies program. Across the street, the Gallery on Queen will showcase the work of five Acadian artists including Marie Hélène Allain, Hermeìneìgilde Chiasson, Éveline Gallant Fournier, Claude Roussel and Romeo Savoie. Take a stroll up Queen Street for free admission to the many engaging exhibitions at theBeaverbrook Art Gallery including a selection of both early and brand-new acquisitions to the collection, as well as visiting exhibitions of works by Lynn Johnston (For Better or For Worse), Michael de Adder, and William Kentridge.  A short walk to Gallery 78 will reward visitors with three exhibitions including “Inside and Out”, “Blooms” and “Deliciousness” all featuring the work of Atlantic Canadian artists. The Charlotte Street Arts Centre will display the mixed media works of MJ Edwards and drawings and paintings by Sheri Larsen, in addition to photography by Newcomer Youth in Fredericton.

Take your time and enjoy as many galleries as you desire, in any particular order.

CreatedHere is all about New Brunswick artists.

CreatedHere is all about New Brunswick artists.
We’ve got a growing directory of artists and craftspeople, three issues of a print magazine full of stories about NB artists, and lots of online content to connect you with the region’s finest creative people.

I visited Toby Graser in her studio a few weeks ago. Did you know she used makeup as paint when she was first starting out?

Faster than Light: An Exhibition of Photographs by Newcomer Youth in Fredericton 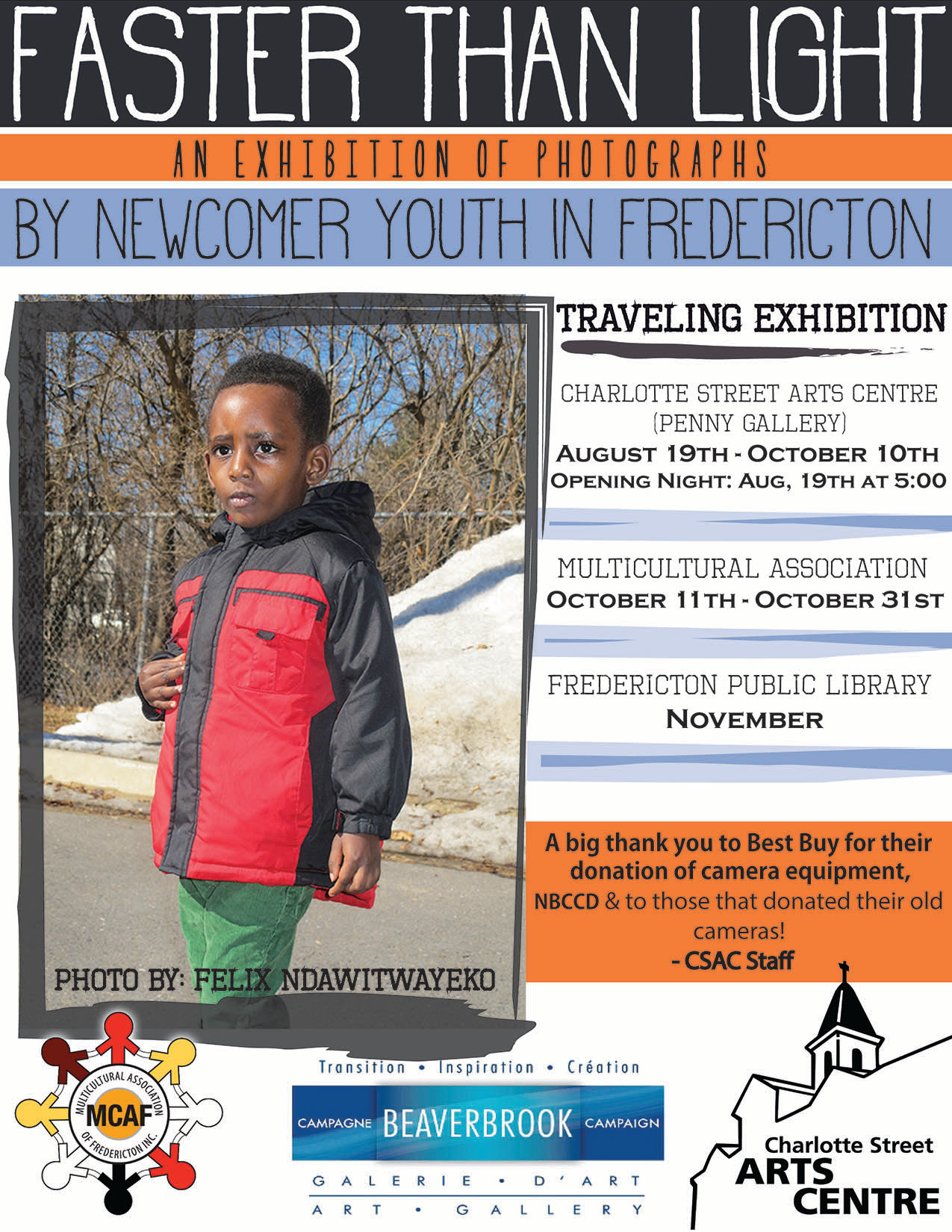 What can our world look like or become when we transform experience into images? In a world that moves as fast as light, when do we find time to get to know each other, to tell our stories?

Faster than Light: An Exhibition of Photographs by Newcomer Youth in Fredericton, celebrates many of our city’s newest citizen youth by showcasing examples of their photographs. The exhibition title calls to mind the notion of travel through space-time, through a wormhole. By doing so it playfully reminds us that these talented photographersarrived to Fredericton from a distant place. Photographing helped them create a conduit between their former homes and ‘here’, a symbolic bridge between their ancestral homelands to an ‘alien place’. Strange as our city may seem to us sometimes or foreign to them, today Fredericton is their new home. Later this year, the exhibition will tour to other public venues in the city. Iran, Iraq, Japan, Korea, Nepal, Niger, Syria, Sierra Leone, Ukraine, and other countries may well have lost their best and brightest to Fredericton.

A machine for seeing, a time and space transformer, in the hands of the young, the camera is a powerful tool that enables self-discovery. It is a means for them to communicate thought and emotion and to share with us what they want us to see. The camera, however, is more than a manipulator of space-time; it empowers those who use its ‘alien images’ to communicate value. Not as subjects reduced by well-meaning journalists but as agents in control of their own self-images, the photographer’s search for identity, community and belonging are embodied in this small but rich selection of prints. Enjoy, reach out; share your stories!

David Miller, artist and teacher, approached Kaylee Stevens, former Program Coordinator at the Charlotte Street Art Centre, with the idea to engage Syrian youth in a photography project. Stevens, together with her colleagues at the CSAC, organized a series of workshops, arranged for donations of digital cameras and supplies from within the community, and secured funding through the City of Fredericton. Saa Andrew Gbongbor, Newcomer Youth Program Developer Extraordinaire, facilitated on behalf of the Multicultural Association of Fredericton. The NBCCD generously loaned cameras and their photography facilities. While the first workshop proved very popular, the need persisted to provide youth with meaningful activity and tangible links to their new community.

Participants learned techniques and how better to compose what they saw through viewfinders and on screens. They explored how photographs communicate intention and create a visual metaphor. Participants experimented with light and shadow and learned how images form inside a camera obscura. They tested the emotive and poetic power of photographs. They drew with light and saw firsthand how their own photographs are not merely fleeting impressions but can become tangible, lasting records of their experience. Participants were encouraged to play as they learned, and they were asked to photograph themselves, their surroundings, the people, friends and family members with whom they interacted; to photograph what they wanted to share and see as photographs.

“It’s empowering to be behind the lens rather than the subject of someone else’s lens, which is really the crux of our project. Rather than being seen as victims, these youth act, they create their own images and by doing so, they begin to shape their identities. This is the basic power of the photographs that these teenagers have made.” David Miller

This is a traveling exhibition beginning in our Penny Gallery at the Charlotte Street Arts Centre. It will then move to the Multicultural Association on October 11th – October 31st and culminate with the last installation at the Fredericton Public Library, with an opening on November 3rd in Chickadee Hall.

Communications & Marketing
We now have a new employee to work with the communications & marketing of the NB crafts council. She’s working hard to resolve the ongoing (and multi-layered) website issues which will be sorted out shortly. Thank you for your patience. The marketing committee along with the board, the public, and the staff are considering a new logo design, and we welcome your participation in this process (please follow this link to vote : https://99designs.ca/contests/poll/ll0s9o?urlcategory=logo-design). If you have some suggestions, ideas, etc. don’t hesitate to talk to: Andréa Turcotte, communications@nbcraftscouncil.ca