Roadside Attraction at Gallery on Queen 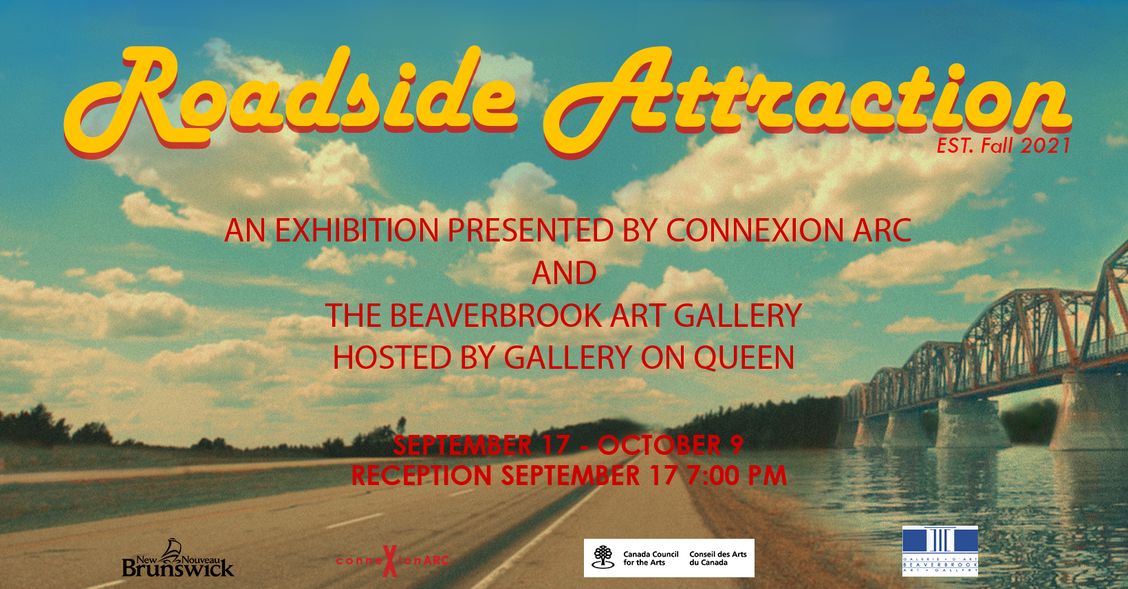 Roadside Attraction is a collaboratively created & curated group exhibition that brings together New Brunswick artists, writers, and curators to examine NB identity through the lens of the tourism industry, using the province’s kitschy, nostalgic, unusual, or forgotten attractions as a catalyst.

The Trans-Canada Highway officially opened in 1961 and was completed in 1970, ushering in a new era of car-based tourism and cementing New Brunswick’s status as the “drive-through province” of cross-country travel. This mid-late 20th century tourism boom also coincided with still and motion photographic technology becoming more accessible to the masses; colour film and Super 8 became widely available in the 1960s and ‘70s. This led to the rise of the roadside attraction, and Canada’s “Picture Province,” as was touted on the license plates of the time, became littered with World’s Biggests and natural oddities which now mainly exist on forgotten stretches of two-lane highway and in shoeboxes full of old slides in closets across the country.

This project examines the histories of New Brunswick’s tourism industry – vestiges of the infrastructure that remains from its heyday; the effects of trends in tourism on local communities & the natural landscape; and tourism’s ongoing relationship to colonial power.

Roadside Attraction poses questions about New Brunswick identity, art vs. kitsch, and ever-changing trends in public interest. Where does one draw the line between public sculpture and tourist trap? How can we re-imagine the roadside attraction for a 21st century world?